He got a quick reply from a New York woman, who fired back a private message: “Tell me your secret—how did you get a robust Purell supply? I had to fight a woman at the grocery store for a can of tuna.” While it was good to hear from another human being, Stephane never responded. Because, well, Covid-19.

The novel coronavirus that causes the malady has infected more than 200,000 people around the world and ushered in a fraught new era of online dating. Millennials, trapped under indefinite work-from-home policies and banned from bars, are on dating apps—swiping, texting, flirting—more so than before. Active users rose 8% on Bumble during the second week of March in the U.S., according to App Annie, which tracks downloads. The big question is how long that will last now that courting in the real world is basically verboten.

Dating apps typically run on a freemium model, providing basic services without charge in the hopes that customers will pay more for extra features, such as unveiling who has swiped right on you or applying more granular filters to narrow the dating pool. As social distancing guidelines are rolled out across the U.S. and Europe, dating apps are betting more people will sign up and pay extra to find love—even if it’s virtual for the time being.

The bullish view on Wall Street is that users will be willing to spend more time and money on dating apps because they’ve got nothing better to do. The bearish take is they’ll stop paying for extra services because the thought of being within breathing distance of a stranger is more scary than sexy.

This month, Brent Thill, an analyst with Jeffries, cut his annual revenue growth forecast from 16% to 9% for Match Group Inc., which owns some of the most popular dating apps in the world including Tinder, OkCupid and Hinge. The shares have fallen 30% over the past month, in line with the S&P 500 Index. “The big challenge right now is, who wants to go on a date with someone they don’t know,” Thill says. “If I was single, I wouldn’t want to date anyone right now.”

No one really knows how to responsibly date in a pandemic. Some apps are advising couples to meet in open spaces and avoid any form of physical contact; others are suggesting a safer, more sanitary solution: phone sex.

“We know it can be a drag being cooped up inside, but there are lots of other ways to have fun: sexting or phone/video sex are great ways to get hot without getting sick,” the dating app #Open, aimed at couples in open relationships, sent in a message to its 50,000 users on Monday. “This isn’t a good time to be swapping spit.” 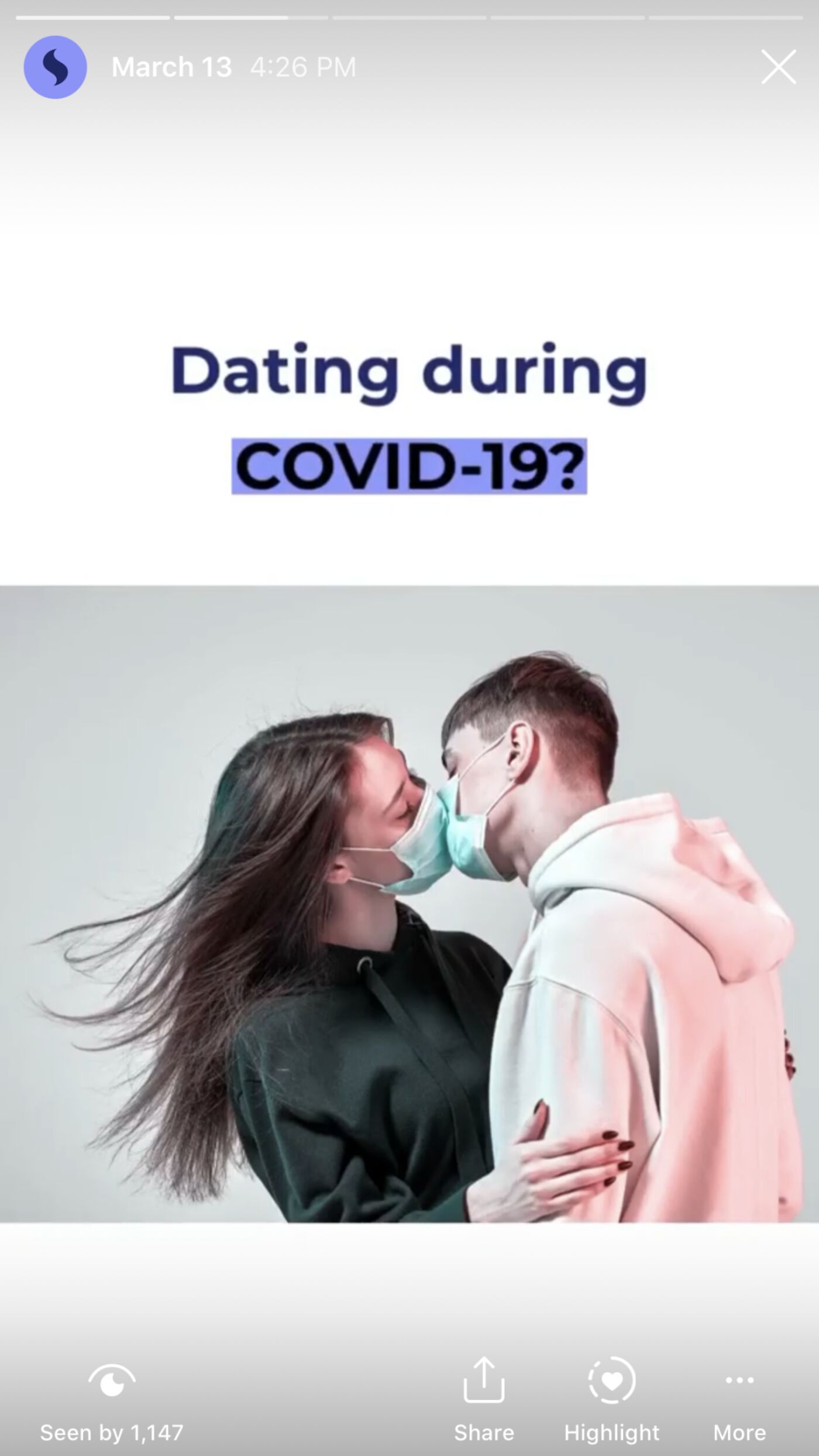 Last week, New York Mayor Bill de Blasio was asked how daters should respond to the disaster. That question “goes to the heart of the matter,” de Blasio said, adding that people cannot get to a point of hopelessness right now. “I do think it’s fine to have a social life, but you’ve got to exercise some smart rules. If you're sick, don’t go on a date. If the date is sick, don’t go on the date.” He suggested keeping a little more distance and said it would be wise even to refrain from kissing one another on the cheek. On Sunday, physically dating in the Big Apple became near impossible as officials closed down restaurants, bars and movie theaters as well as urging residents to stick to strict social distancing guidelines.

“People are feeling isolated, particularly those who are single and can’t go home to their parents and families,” says Jordana Abraham, co-founder of Ship, a dating app that allows friends to swipe on behalf of its users. “They are physically isolated, but not socially isolated.”

Ship says group chat messages exploded 60% nationwide in the past week. Group messages first started ramping up in Seattle when social distancing rules were enforced. They skyrocketed in New York shortly after similar rules were put in place—with messages more than doubling in frequency in the past seven days alone.

OkCupid has also reported surging engagement and messaging among millennials. People are talking more through the app—and they are talking about coronavirus. OkCupid saw a 188% increase in coronavirus mentions on dating profiles between January and February. People being people, cringeworthy virus pickup lines are starting to proliferate. As in: “Are you the coronavirus? Because you take my breath away.” And random hookups are fast being replaced with weeks-long virtual courting, complete with cootie paranoia and forced chivalry. You know who’s really gonna suffer during this social distancing? Dudes on dating apps Welcome back to courtship, Brad. Welcome back to talking to a gal for WEEKS prior to meeting. We’re pen pals now, my dude. We bout to get Jane Austen up in here. Now, write me a poem.

The coronavirus itself even has a mock dating profile, which tells users its hometown is Wuhan, China—the epicenter of the outbreak—and that its major turn-offs are face masks and doctors.

Match hasn’t yet revised its forecasts. The Dallas-based company is monitoring the situation “but can’t comment definitively on what impact we are seeing,” a company spokesperson says. Its star performer, Tinder, is also mum on member activity. However, the app, synonymous with a “hookup culture” on college campuses, is urging users to be cautious. “While we want you to continue to have fun, protecting yourself from the coronavirus is more important,” Tinder told to its 5.9 million global subscribers, advising that they wash their hands frequently, carry hand sanitizer, avoid touching their faces and maintain social distance in public. 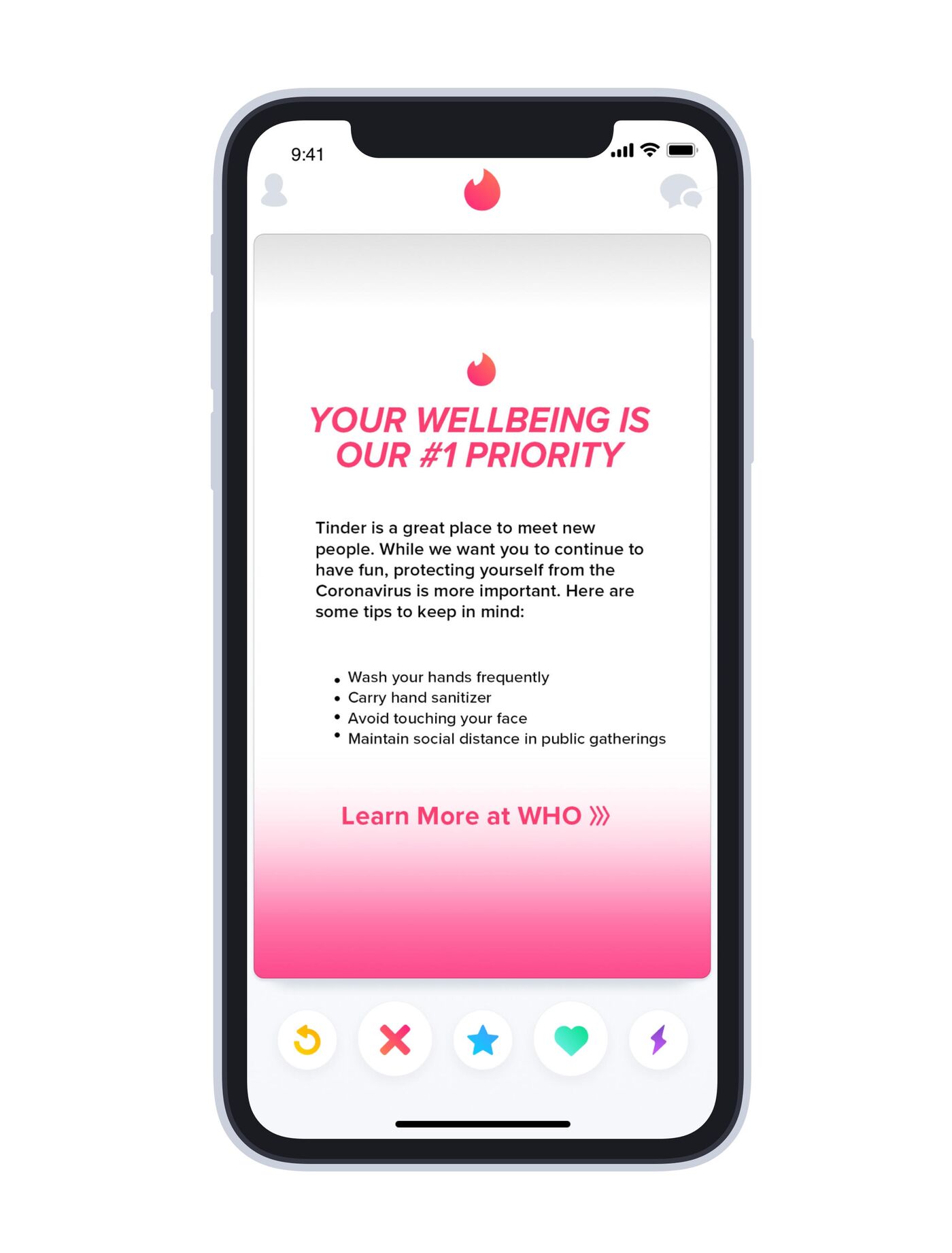 Amsterdam-based The Inner Circle was created for working professionals willing to pay a premium to attend exclusive events, such as cocktail-making classes, jazz nights and ski trips, to meet verified matches. Co-founder Michael Krayenhoff says the virus has presented a wholly unromantic dilemma for the business. “We had to make a decision as a company to cancel all our events and refund everyone,” he says. As the pandemic worsened, Inner Circle members began turning to phone calls and video chats. During the first week of March, they were exchanging phone numbers and sending messages about “FaceTime” and “Skype” about 30% more often than a month earlier. This led the company to actively promote virtual dating ideas like “Self-Isolate and Chill,” a play on “Netflix and chill,” a euphemism for sex. “It’s about two people putting on the same television program at the same time, then calling to talk about it as they watch,” Krayenhoff says. “I think that has something very exciting or romantic to it.”